Man City manager Pep Guardiola provided injury updates on a pair of defenders, and said it will be a “big mistake” to compare new signing Ruben Dias to club legend Vincent Kompany.

Man City rode out 1-0 winners to secure a vital three points versus Arsenal.

The win took on greater significance after Liverpool had earlier dropped points, a fact not lost on Guardiola.

“It was an important victory,” said the Spaniard. “The clean sheet was important. They fought and had the desire to win and try to do it.

“We knew it would be a tight game, a difficult one, but for us winning games is important for the confidence and mentality.

“Ederson is an incredible ‘keeper for us. He is fantastic as a professional. He is so good.

“From day one, he has been so strong. Good moments and bad moments don’t affect him. He made two incredible saves.

“We are incredibly happy Sergio Aguero is back, for him, for us. It was four months. He is still a way from his condition, but he got 60 minutes.

“On Wednesday we have another game. It is important to have him. We need his goals.”

On the injury front, Guardiola provided updates on a pair of defenders.

“Benjamin Mendy will be three or four weeks,” he added. “Aymeric Laporte we expect back sooner. Maybe one week, ten days.”

Ruben Dias performed admirably as City strode to a clean sheet, but Guardiola was reluctant to make comparisons between he and club legend Vincent Kompany.

“It will be a big mistake to compare Ruben Dias to Vincent. Vincent is unique. Ruben is young.

“He is a type of leader. He will lead the team. He is just 23 years old. We cannot forget he plays for Portugal. We are delighted with what we have seen.”

Man City tails up after victory 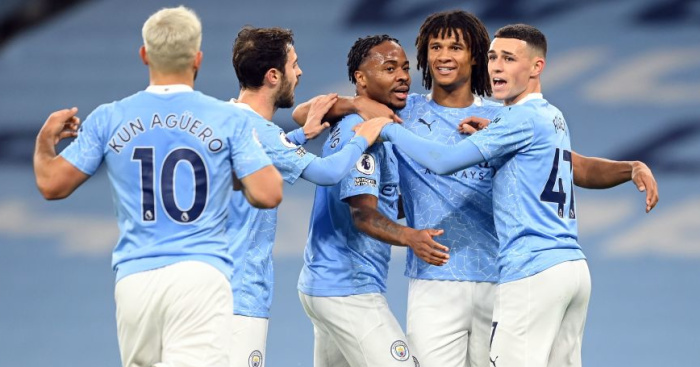 Matchwinner Raheem Sterling also spoke to the press, and highlighted the importance of the victory to compensate for the points already dropped this season.

“We dropped points early on in the season so it was important to keep on winning,” said the forward.

“Coming back from the international break we knew we needed a good performance and to pick up points to kick-start the season. Today’s result definitely gives us confidence.

“I felt I was quite lucky to get on the scoresheet. It was not one of my better games but I am just grateful to be able to help the team.”

On Sergio Aguero’s return: “At times in the first half me and Sergio got on ball really well in the pockets in front of their defence and took up some great positions.

“It felt like we were much more fluent and able to keep possession. To have a striker to link up with was really good.”